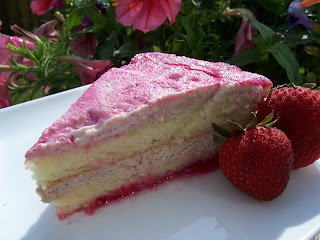 Thanks to Peabody for your bold choice! A big thank you goes out to all the Daring Bakers whose support and encouragement cushion the blow of disaster. Please visit Peabody's site for the full recipe and to see what all the other brilliant Daring Bakers created, click here. Looking forward to next month!
Posted by Canadian Baker at 10:56 AM 24 comments: 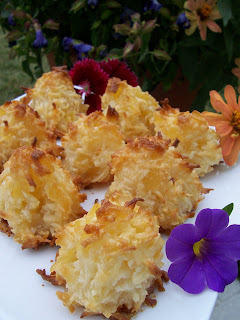 Tropical Paradise is the theme for the 33rd edition of Sugar High Friday. Mary at Alpineberry wanted us to come up with something that said 'tropical' to us and write about it. The best way I could bring the tropics home was to make use of island fruits, notably coconut and pineapple.

These cookies come from the book Ripe for Dessert by David Lebovitz. I instinctively looked through this book first because he has organized his book by fruit and chapter two was entitled Tropical Fruit - perfect for this challenge!

The recipe is super simple to pull together and makes use of everyday ingredients. The cookie is sort of like a macaroon, crispier on the outside and soft and chewy on the inside. I had to decrease the baking time by ten minutes but if you like a more browned cookies, then you can leave it in for the full 30 minutes.

The baked cookies packed a pineapple punch! The caramely flavour of sugared pineapple melded nicely with the chewy coconut. They were moist and small enough to pop in your mouth. David Lebovitz said this was his favourite current pineapple coconut cookie and, although I'm still undecided on this, my taste-testers seemed to like them a lot. If you'd like, dress them up with a drizzle of chocolate or a sprinkling of powdered sugar. No matter what you do, these cookies have Tropical written all over them! 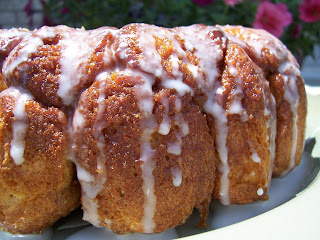 If you want to impress friends and family, making a Bubble Bread is the way to do it. This fun-to-make bread consists of a yeasted sweet dough that is rolled into golf ball-sized chunks, then rolled in butter and cinnamon-sugar and arranged in a Bundt pan. After it had risen, you bake it and devour the sweet cinnamony morsels that have been drizzled (or not) in a sugar glaze.

When making this bread, give yourself enough time to make the dough and let it rise. I think it took me about 2 hours from start to finish with no dilly-dallying. The final result looks really neat - sort a cross between cinnamon buns and a Bundt cake. It is also fun to eat and the portions are smaller so, in theory, the guilt factor is as well. It's like eating a Timbit instead of a whole doughnut, you know? I've included some modifications to the recipe in the recipe link below just for reference. I know some of you may be weary of working with yeast and I totally understand where you're coming from. But, if you're looking to challenge yourself this is a yummy way to get started. 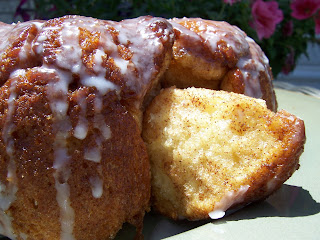 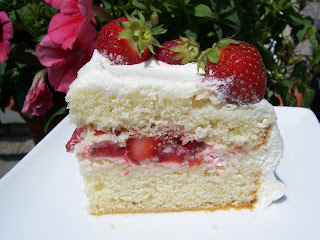 Alas, strawberry season had almost come to an end here in Ontario. This past weekend at my local Farmer's Market signs were posted saying "Last Berries of the Season!". I took advantage of this final moment to buy some small, but very red berries to make a Strawberry Shortcake-type cake for a BBQ I had yesterday.

The component of this cake I wanted to post about is the White Butter Cake which I used as a base for whipped cream and strawberries. It is a great cake for filling with pretty much anything you like and has a lovely hint of orange due to the addition of rind in the batter. It makes a 9 x 13-inch cake, perfect for picnics and large crowds. I made it the day before we ate it and it was moist, dense and yummy. The recipe is a little different from the traditional creaming method, but as long as you have a big enough bowl, you shouldn't have any problems. 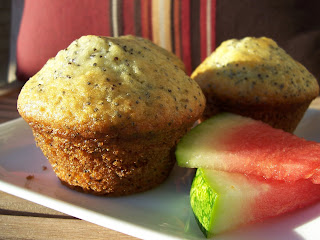 Finally summer holidays are here and I've caught a chance to put a post up. I know, Lemon Poppy Seed Muffins aren't all that exciting but I just wanted to let you all know I was still here and am hoping to do more frequent blogging in the near future. My in-laws are visiting from North Vancouver, British Columbia as well so things have been exciting here in the Canadian Baker household.

These muffins are as you would expect - moist and lemony made slightly sticky with a lemon glaze poured over top. You can whip these up in 10 minutes and you can add more or less poppy seeds to your liking. They're not fancy at all and there are probably better recipes out there but I enjoyed them with some hot tea. The poppy seeds were crunchy and lingered on well after the muffin was finished. They also freeze well wrapped individually in plastic wrap and tucked into a Ziploc bag.

To those of you in Canada, Happy Canada Day! We'll be enjoying fireworks tonight!