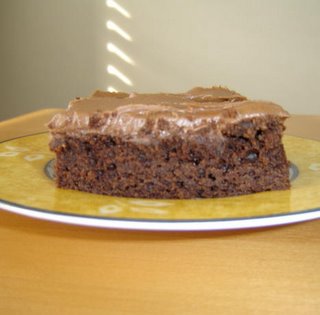 Making the perfect brownie is a tricky thing. Most of the people I know do not like 'cakey' brownies. They prefer the more dense and velvety type - the kind that is so chewy that there is little crumb. I have to admit that I fall into this same category and have been trying to make great brownies for years. I've had many disasters but have learned that brownies do not benefit from overcooking and sometimes taking them out of the oven 5 minutes early is a good thing.

The brownies I made today are from Robin Hood Home Baking called Chewy Chocolate Brownies. The method was straightforward and they baked for 20 minutes. Once cut, they were not dry nor underdone. They are dense but not so fudgy that they will stick to the top of your mouth. Overall, I'm pleased with the result and will be taking them over to Elizabeth's tonight for tea.

The icing is from the Treasury of Desserts which I received as a gift from a university roommate. It's a great book that has come in handy over and over again. The 'Simple Brownie Icing' was indeed easy and simple yet added pizzazz to the humble brownie.

Posted by Canadian Baker at 1:24 PM

I have tasted these brownies and I think they are splendid! Good Job:-)