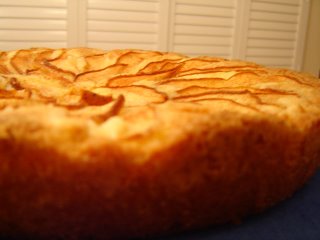 What is the difference between a cake and a torte? Here's what I found out: 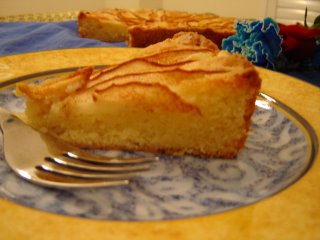 I made the Aunt Daisy's Fresh Fruit Torte from the Magnolia Bakery Cookbook and the main similarity it had to the above definitions was that it used a small amount of flour as compared to a regular cake. The batter was stiff, but spreadable, and no liquid was added in. The recipe did call for baking powder but no nuts. Did I really end up making a torte? Hmmm, well I think that 'torte' is used in the title because the cake is one layer and it does not rise as much as a plain cake. It came out moist, had a tender crumb and tasted fantastic - just like it came from a bakery. I used unpeeled Bartlett pears for the top and sprinkled it with cinnamon sugar. This torte is easily made in less than 30 minutes (not including baking time) and if there are no pears around, apples work just as well.
Posted by Canadian Baker at 5:19 PM

Canadian Baker, you've done it again. This torte is deliciously sweet, chewy, peary and lovely with tea. Pear lovers should definately try this!

While browsing through your archives I came across this interesting question and in case you haven't found a definite answer yet: In German-speaking countries, a torte is a multi-layered cake with some sort of creamy filling. Sometimes you can come across a cake claiming to be a torte that has more "expensive" ingredients (like eggs/sugar/nuts) in it than usual. Personally, I'd say you made a cake - but as you see, there are no definite answers! No matter what you call it - it looks pretty good to me!