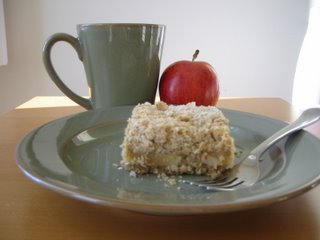 Going to the grocery store mid-February in Ontario will yield very little choice in the fruit department. The most abundant choice right now are apples - Granny Smith, Red Delicious, Golden Delicious, Royal Gala...the list goes on. (Although, finding a bag of Northern Spy apples can be a daunting task.) Ontario has numerous apple orchards and, in autumn, there are no shortage welcoming you to come "pick your own". Even though picking season is over, apples keep well in coolers so we see them looking fresh and shiny months later.

I bought a bag of Royal Galas last weekend to pack in lunches but, since baked apple desserts are a favourite around here, I made Crumbly Apple Squares from the Clueless Baker. The recipe is reminiscent of apple crisp except that it slices up in even squares rather than being scooped. The butter in the crumble is cut in, not melted, making it very crumbly but surprisingly not dry. The squares were enjoyed by all, but I wonder if it would be better to melt the butter next time so the crumb is not so 'loose'. If you'd like to try it out, here is a simliar recipe by Evelyn Raab that uses cranberries as well.
Posted by Canadian Baker at 3:56 PM