What's For Pud? The Victoria Sandwich 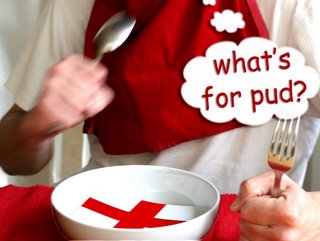 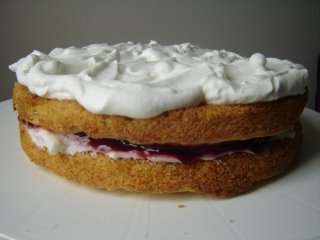 This month Becks & Posh and Jam Faced are hosting an even called "What's for Pud?" in honour of St. George's Day. Remember? He's the one that slew the dragon. The one stipulation for participating was that the dessert entry sent in had to be decidedly English in nature - not Irish, Welsh or Scottish, just English. I was excited to participate because I've never made and authentic English dessert (scones excluded) and it was well-timed since my sister is leaving for London next week for a 2 year working holiday. For this special event I decided to make the Victoria Sandwich.

The Victoria Sandwich which is traditionally served at afternoon tea. It is a two-layer sponge-like cake that is filled with a layer of jam and vanilla frosting or whipped cream. It is cut into small "sandwiches" and served in a similar manner.

Anna, the Duchess of Bedford (1788-1861), one of Queen Victoria's (1891-1901) ladies-in-waiting, is credited as the creator of teatime. Because the noon meal had become skimpier, the Duchess suffered from "a sinking feeling" at about four o'clock in the afternoon. At first the Duchess had her servants sneak her a pot of tea and a few breadstuffs into her dressing room.
Adopting the European tea service format, she invited friends to join her for an additional afternoon meal at five o'clock in her rooms at Belvoir Castle. The menu centered around small cakes, bread and butter sandwiches, assorted sweets, and, of course, tea. This summer practice proved so popular, the Duchess continued it when she returned to London, sending cards to her friends asking them to join her for "tea and a walking the fields. The practice of inviting friends to come for tea in the afternoon was quickly picked up by other social hostesses.

Queen Victoria adopted the new craze for tea parties. By 1855, the Queen and her ladies were in formal dress for the afternoon teas. This simple cake was one of the queen's favorites. After her husband, Prince Albert, died in 1861, the Queen Victoria spend time in retreat at the Queen's residence (Osborn House) at the Islan of Wight. According to historians, it was here that the cakes were named after her.
Source: History of the Victoria Sandwich

I found a lot of recipes on the Internet for this cake but decided to check out what my local library had to offer in the way of British cuisine. Unfortunately, the selection was limited but I did manage to find an ancient book from 1982 entitled "Cooking the English Way" and decided to use its version because the author's first love "remains the food of her native country".

I was sceptical but time was running out.

Overall, the cake was super tasty. The combination of golden cake, tart raspberry jam, sweet frosting and cool whipped cream is very pleasing to the palate. I was pleasantly surprised to find out that this cake is easy to assemble and I would absolutely make it again. The only change I would make is to find a different sponge cake recipe. The one in the book produced a crumbly, slightly dry cake but was by no means inedible. And, of course, it is the perfect accompaniment for a nice hot cup of Tetley. :)

Thanks Sam and Monkey Gland for creating this fantastic opportunity to explore English confections. I had a blast!

Tagged with: What's For Pud? and St George's Day
Posted by Canadian Baker at 9:30 PM

What a lovely cake! It looks like it would be perfect with a cup of tea. I love the history behind it too.

i love your picture! the sandwich sounds wonderful.

Looks delicious! My great-grandmother used to bake this cake every Sunday. It was so tall, light, and moist. Yum.

Me - Thank you! I hope the next time I can get the cake light and tall like your great-grandmother did. :)