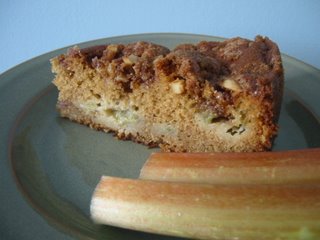 What is rhubarb? This distinctly colourful plant is seen all over Ontario in the summer yet many have never cooked or baked with it, including myself. What do you do with those red stalks? Well, you can use them to make ice cream as the Candied Quince did or you can make it into a tasty Rhubarb Coffee Cake.

Rhubarb, or Rheum rhabarbarum, is a vegetable with a unique taste that makes it a favorite in many pies and desserts. It originated in Asia over 2,000 years ago. It was initially cultivated for its medicinal qualities, it was not until the 18th century that rhubarb was grown for culinary purposes in Britain and America. Rhubarb is often commonly mistaken to be a fruit but rhubarb is actually a close relative of garden sorrel, and is therefore a member of the vegetable family. Rhubarb is rich in vitamin C and dietary fiber. The Rhubarb Compendium

The cake I made called for fresh chopped rhubarb and was a snap to prepare. The recipe introduction stated that the cake was "studded with juicy pink rhubarb" which I thought would look pretty but when I chopped up the rhubarb it was more of a light lime green - only the outside was pink. I got a bit nervous cutting it up because it looked like celery and I didn't want to make celery cake. My fears were intensified when I actually took a bite and it was sour, ack! Mr. CB came over and picked up a couple chunks and said "Yum rhubarb!" I asked him if this was how rhubarb was supposed to taste and he said yes so I proceeded to make the cake completely unsure of how it would come out.

Well , it turned out just fine and the rhubarb got soft except I had juicy green chunks instead of pink. Mr. CB loved the cake and when I tried it, it was not sour at all! Wow, I was surprised. It was moist and yummy - definitely a recipe to try again. Maybe the rhubarb I bought wasn't ready to be eaten yet. Should the stalks be pink all the way through? Any insights would be appreciated because I would love to continue my Summer Adventures in Rhubarb!

Recipe: Rhubarb Coffee Cake
Posted by Canadian Baker at 8:58 AM

Looks like an interesting cake. I too have never worked with rhubarb simply because I am not too fond of its taste. But pairing it with coffee seems like a good idea.

Jenjen - I'm still not sure if I have tasted the true flavour of rhubarb. I think I have to keep trying. A cup of coffee sounds perfect for this cake. :)

I had no idea that rhubarb was a vegetable. I assumed it was a fruit. Thanks for the information. And great coffee cake!

Rhubarb stocks areindeed only red on the outside, and when peeled they do look a lot like celery... don't be alarmed, it's natural! The only time that Rhubarb is generally pink is when it's ripe and cooked with sugar--then the whole mixture turns a soft pink colour and it's really quite tasty. We have a big patch of it in the back yard, and use it in everything from cakes and muffins to strawberry-rhubarb jam and just plain, cooked with sugar like a preserve.

Great first foray into the world of Rhubarb!

Ivonne - Neither did I!!

Lei - Thanks for your post! The info is really helpful and I'm glad to know that it is supposed to be green. :)

Rhubarb desserts are wonderful! I'm glad you've discovered it, and I'm curious to see what other rhubarb goodies will be coming out of your oven!