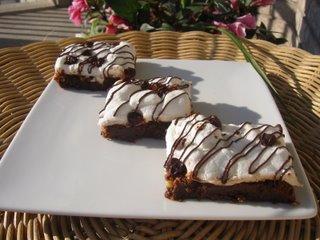 I've had a package of marshmallows in my cupboard for a while waiting to be made into brownies. An occasion popped up yesterday where I was be able to make them and have the opportunity to share as much as I could with friends and not have too much left at my house.

The recipe for Rocky Road Brownies comes from my Baker's Best Chocolate Cookbook that I mail-ordered years ago. The marshmallows I had were the large ones, so I cut them up and sprinkled them over the hot brownies and let them melt a bit more in the oven. They spread out on their own and covered the entire brownie base. When they were cool I drizzled the top with melted semisweet chocolate to make them look pretty. They were a bit difficult to cut as the marshmallow is very sticky but they tasted very nice - the brownie was moist and studded with walnuts and the topping was chewy and gooey. They're definitely a kid-pleasing bar and tastier than, dare I say, store-bought. :)

yummmm.... between you and Nic over at bakingsheet, I'm gaining weight this week just drooling over your gorgeous Rocky Road Brownie photos!! But I do have to ask--is there a calorie-free version?!

this looks gorgeous!! I love your site, you are continually giving me ideas on what to bake next!

Jenjen - I'm glad you enjoy the site! Thanks for visiting. :)