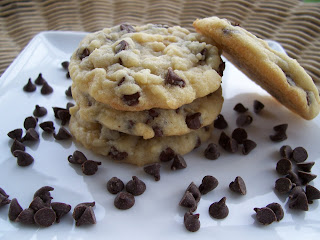 You would think that finding a really good chocolate chip cookie recipe would be a simple task. I've tried many with varying degrees of success and I envy those of you who have had recipes handed down to you. I, however, do not have much of a baking legacy in my family so I rely on my books to help me out.

This recipe comes from Canadian Living and I have tried it many times before with lacklustre results which I why I'm only posting about them now. I never thought they were great, let alone best-ever, but yesterday I made some because I had all the ingredients. I had to refrigerate the dough because dinner was in the oven and this simple step made all the difference.

The cookies came out nicely rounded and definitely not like a flat frisbee. The chilling helped the cookies retain their shape so they were still rounded and nicely puffed. I was pleasantly surprised when I pulled then out of the oven and when I sent out two dozen to the kids in the backyard they were gone in 30 seconds. Really, they were. So I've learned not to give up on recipes that don't turn out perfectly the first time. Sometimes all it takes to wreck a batch of cookies is a bad mood and sometimes all it takes to make a good batch is a positive attitude.

Love your blog
This is the ONLY recipe I use for choco chip cookies. To make them even softer and chewier I always add a teaspoon of cornstarch.

Anon - Thanks for the tip! I will try it next time I make these.

I never thought of refrigerating the dough. I'll have to try that. Your cookies do look wonderful!

Amazing how our mood can affect things. Looking at those cookies puts me in a good mood. Thanks.

You are so right about the effect an attidude can have on a recipe. Glad you didn't give up on these chocolate chips -- the photographs look scrumptious!

Jen, I'm printing this recipe now - I want to bake them with my little sister tomorrow afternoon.

They look delicious! Tks for sharing!

They do look really good. they have such a nice shape and the chips look perfect. I will have to save this recipe.

There's an excellent recipe for "Thick and Chewy Chocolate Chip Cookies" in "The New Best Recipe" cookbook. I've looked high and low for a good cc cookie recipe that produces not-flat cookies, and for a while I used an old Betty Crocker recipe with mixed results, depending on whose oven/baking sheets I used, but the other one seems to produce consistently thick, soft...and GIANT results (though size, of course, is mostly up to the baker.)

Thanks for sharing the recipe & the tip about refrigerating the dough. I am still searching for the best choc chip cookie, so I will have to give this a go when I am in a good mood :-)

I love chocolate chip cookies. We always use the recipe on the back of the Nestle package -- with pecans. Yours look very tasty. YUM.

these do look like the best chocolate-chip cookies. I do believe that the mood your in translates to your cooking ...so I always try to cook when I'm happy and excited.

I am going to try your recipe today! I was wondering if you might be able to help me with another recipe. A few years ago, the American Food TV show "Food Finds" featured a Canadian baker who had a reputation for the best chocolate cookies in the world. He was willing to give out his recipe if you e-mailed him, and I did, but I have lost the recipe! Do you, by any chance know about this recipe??? I never thought I'd find it again, but your site gives me new hope! Thanks for any help you can give me. Gloria in Boston, MA

Gloria - I will look into it. If I find anything I will definitely let you know!! Thanks for reading. :)