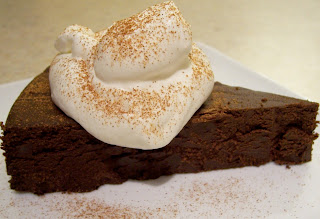 Mousse is one of those desserts that can be made a myriad of ways and comes in all kinds of different forms. Some don't like to make (or eat) it because of uncooked eggs in the mix but, I found this baked version that puts that fear to rest.

The mousse mixture contains sugar, chocolate, eggs and butter. This concoction is combined and poured into a round baking pan. It is then placed in a bain-marie in the oven. I was not sure what to expect texture-wise. Would it be runny, soft or firm when it came out?

After 40 minutes it was finished and was solid. I let it cool and inverted it onto a cake plate and placed it in the refrigerator since we weren't going to eat it that night. I did, however, sneak a small taste and the texture was smooth and not too sweet but I wasn't entirely convinced I liked it.

The next day the mousse tasted fabulous. It was like dense chocolate cake with the texture of a cheesecake. It was moist but a little crumbly and melted on the tongue. The mousse sliced like a dream as well. I was pleasantly surprised that my family liked it and asked for seconds. It was not quite as sweet as it should have been since I had to substitute some of the semisweet with unsweetened. After adding a generous dollop of cinnamon whipped cream and I had a impressive, yet easy to prepare, dessert.

I have never heard of a baked mousse before, but now I am very intrigued and want to try it out!

That looks (and sounds) amazing. I made chocolate mousse a few weeks ago and it made for a very happy week. My sister grossed out when I told her it had raw eggs in it...this version might be just what she needs!

This looks nice - it looks like a chocolate torte i.e. denser than a 'raw egg' mousse but not cakey.
What would I give for a slice of that right now?
(Answer: Lots!)