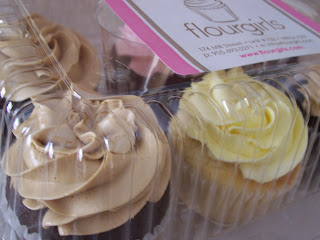 The cupcake craze has come to Milton! Years ago, you could first see the trend emerging in New York at Magnolia Bakery. They created these colourful sugary confections to the delight of customers and tourists alike. Since then, the cupcake has never looked back. It gained popularity because it appealed to those desiring a single-serving dessert, are easy to eat and come in all different types of flavours. Now the cupcake has come to my backyard.

Flourgirls is a new bakery that opened in late 2007. What started off as a home-based business has now become a cozy spot for those looking to satisfy their sweet tooth, have a coffee and chat with friends. Patrons can delight at a display case filled with full-sized and miniature cupcakes. The day I went there were many to choose from and I picked Lemon, Raspberry, Marisol (dulce de leche) and Mocha cupcakes. (All of the cupcakes were chocolate, except for the Lemon which was vanilla.)

First of all, I can definitely say that children will love these cupcakes. I barely had enough time to take some pictures before they were ravaged upon by my family. I chose a Marisol cupcake for myself and throughly enjoyed the half that I ate. The icing was ultra light, smooth and velvety. It was buttercream at its best. The cake was moist and fluffy creating a overall tasty cupcake.

So if you're ever in Old Milton, do check them out. They also sell cakes and other baked goods that are listed on their website www.flourgirls.com. 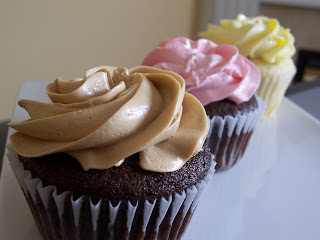 Posted by Canadian Baker at 1:27 PM

Not generally a fan of cupcakes or piped frostin, I have fallen in love with these. The frosting looks as light as you describe and particularly in your last picture they look like gorgeous roses. Very tempting

Hello from Georgian Bay! I will be in Milton in 2 weeks time and I will go get a yummy treat from them. So glad to discover another Canadian blogger. Love all your posts - I'll be back! I've linked you!

This e-mail was passed on to us and we thought it was quite an interestingstory.> It IS a true story! Enjoy the recipe!

A little background: Neiman-Marcus, if you don't know already, is a very expensive store; i.e., they sell your typical $8.00 T-shirt for $50.00.Let's let them have it! THIS IS A TRUE STORY!>> My daughter and I had just finished a salad at a Neiman-Marcus Cafe in Dallas , and we decided to have a small dessert. Because both of us are such cookie lovers, we decided to try the Neiman-Marcus cookie." It was so excellent that I asked if they would give me the recipe, and> the waitress said with a small frown, "I'm afraid not, but you can buy the recipe." Well, I asked how much, and she responded, "Only two fifty. It's a great deal!" I agreed to that, and told her to just add it to my tab.>

I called Neiman's Accounting Department and told them the waitress said it was "two fifty", which clearly does not mean "two hundred and fifty dollars"by any reasonable interpretation of the phrase. Neiman-Marcus refused to budge. They would not refund my money because, according to them, "What the waitress told you is not our problem. You have already seen the recipe. We absolutely will not refund your money at this po int."

I explained to the accounting Department lady the criminal statutes which govern fraud in the state of Texas . I threatened to report them to the Better Business Bureau and the Texas Attorney General's office for engaging in fraud.

I was basically told, "Do what you want.. Don't bother thinking of how you can get even, and don't bother trying to get any of your money back.">

I just said, Okay, you folks got my $250, and now I'm going to have $250worth of fun." I told her that I was going to see to it that every cookie lover in the United States with an e-mail account has a $250 cookie recipe from Neiman-Marcus..for free. She replied, "I wish you wouldn't do this." I said, "Well, perhaps you should have thought of that before you ripped me off!" and slammed down the phone.>


So here it is!>> Please, please, please pass it on to everyone you can possibly think of. I paid $250 for this, and I don't want Neiman-Marcus to EVER make another penny off of this recipe!>>

Measure oatmeal, and blend in a> blender to a fine powder. Cream the> butter and both sugars.
Add eggs and> vanilla, mix together> with flour, oatmeal, salt, baking powder, and soda.
Add chocolate chips,Hershey Bar, and nuts.
Roll into balls, and place two inches apart on a cookie sheet.>
Bake for 10 minutes at 375 degrees.>

PLEASE READ THE RECIPE AND SEND IT TO EVERY PERSON YOU KNOW WHO HAS AN E-MAIL ADDRESS!> THIS IS REALLY TERRIFIC!!> Even if the people on your e-mail list don't eat sweets, send it to them> and ask them to pass it on. Let's make sure we get these ladies $250.00> worth. Enjoy the cookies, they are good!

Milton??? I thought that town sounded familiar - we got our marriage license at the Milton Town Hall!! The woman was SO nice and friendly, something a same sex couple would hardly ever see in the US. We were married in Kilbride and have since moved to Vancouver Island. LOVE your blog!!!