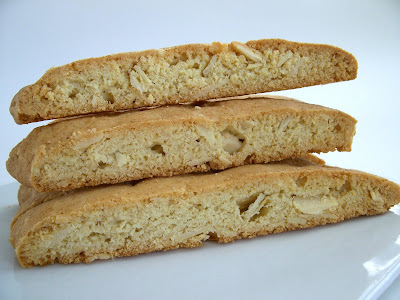 Biscotti is a large coffeehouse chain staple. Everywhere you go, there are those huge glass jars layered with these perfectly identical Italian cookies ready to be dunked into hot beverages across Canada. I never really enjoy these commercial biscotti because I find them more rock-hard than crisp and dry as they should be. Perhaps because of this aversion, I don't make them very often at home but when asked by Mr. CB, I relent.

Biscotti is a double baked cookie. After making the dough (which is sticky) it has to be shaped into logs and then baked. Afterwards, they're taken out of the oven, cooled and sliced. From there, you pop them back in the oven to golden them up and get them crisp. I have tried different recipes, some of which brown more quickly than others, but I found with this Canadian Living recipe the biscotti turned out perfectly. They were nicely golden on the outside and, when cooled, were crunchy, dunkable and thoroughly enjoyable.

Recipe: Almond Biscotti
Posted by Canadian Baker at 8:55 AM

These look great. I'm a big biscotti fan but am always on the look out for the perfect recipe. Will be sure to give these a try.

I just stumbled upon your blog and think it is an excellent read for foodies and especially like the photos and design of the blog.I started off as a blogger myself and realise the importance of a good clean design like you have here. I have now bookmarked it for myself to read and have added you to our new list of "all the food blogs in the world" on www.ifoods.tv which we have been compiling for the last month! Hopefully it will send you some traffic in the long run. Looking forward to reading your thoughts on food so keep up the good work and talk soon. Cheers

I love biscotti but have never made it...I am going to try these out I am sure homemade will be vastly superior to what we get in coffee places:) And almond my favourite:)