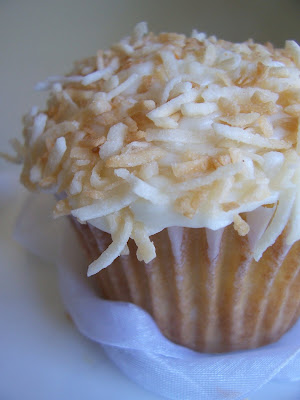 I love coconut and these surely looks like a treat I would enjoy.

Oh those look divine! Thanks for the delicious photo's of your creation.

these look wonderful.... and trust me, cream cheese icing goes with pretty much anything :):):)

These look lovely! And I agree, cream cheese frosting is great on anything!

Looks good. Think my hubby and grandpa would love these.

my mouth is watering, will be trying these soon! Thanks

I love coconut and these look delicious!

It looks wonderful. Am a big fan of both coconut and cream cheese, but haven't tried them together...yet...

Thanks and your photo of it looked heavenly!
~ingrid

definitely worth the wait, i'm sure!

Ok, first I read Alpineberry's coconut layer cake and then I come over and see your coconut cupcakes with cream cheese icing! Now how in the world am I going to choose between these two to make?! (I won't, I'll make both!)

Wow these look heavenly! I love cream cheese icing on apple cake too---and the combination of coconut AND icing is making my mouth water! Can't wait to try these.

Your blog is super. So are your photographies. They make me hungry. I have spent a nice moment when seeing them. Thanks a lot.

They're beautiful and so luscious looking!

Are you ok? It has been almost a month since your last post and you don't go that long between posts. Hope your just too busy for the blog.

OMG!
this looks delicioous!!
i'm gonna do it right now!
my daughter loves coconut..
i love you bLooog!
keep uploading these delicious recipes!!