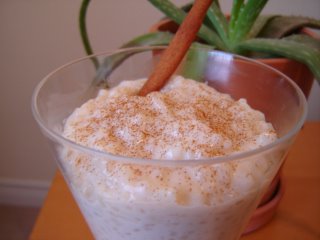 Today it's overcast here in Ontario so I thought I'd make something warm and comforting. The first thing that popped into my head was rice pudding. Fantastic! Not only is it easy and quick to make, it made me happy just to think that I'd be having some creamy rice goodness in the near future. My method of making rice pudding is stovetop. I know there are numerous recipes for ovenbaked pudding as well and once I get my hands on one that I like I'll give it a try.

Finding a recipe was a snap. I have Rose Reisman's Divine Indulgences which contains a lovely stovetop recipe called Rice Pudding with Dates and Apricots. I made a few changes to the actual recipe though. For one, it calls for light soy milk which I substituted with 1%. I have made this recipe previously with vanilla soy milk and it has come out great. There was a little soy aftertaste but it was hardly noticeable. I also left out the dates and apricots because I don't have any in the cupboard right now and I also like my rice pudding without add-ins. Sometimes a small handful of raisins get thrown in but on the whole, I like my rice pudding straight-up plain (with a hint of cinnamon). Today's pudding came out just right. Soft arborio rice with thick sweet milk. Yum.

I know many people who don't like rice pudding that much or even at all. I think it is because of the texture. Sometimes 'custardy' desserts don't have a pleasing mouth-feel that turns people off. Perhaps in rice pudding the rice is a detracting factor to some. They want their pudding to be completely smooth and velvety. As for those who adore rice pudding, the variations are endless. Some like more rice, some less. Some like it more milky, others like it thick. Rice pudding is the type of dessert that can be tailored to meet almost any need - the type of milk, rice and method of cooking can be mixed-up to get a swoon-worthy pudding.

To see other great recipes from Rose Reisman, check out her website.
Posted by Canadian Baker at 10:58 AM

Rose Reisman is now hosting an exclusive trip to Italy in the Spring of 2007. Only 20 women can go. Just thought you'd like to know.