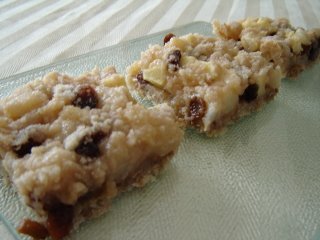 I had very ripe pears sitting on my counter since yesterday that were beyond eating. They were brown and slightly mushy but I knew they could be transformed. The only thing to do with them was bake them into something exciting so I looked around for a recipe that made something small since I only had two.

Well, I looked in Divine Indulgences on a whim. I haven't used this book in a while but had a feeling it might have something appropriate since the recipes do not make large quantities. I found Pear Raisin Streusel Bars and I had all the necessary ingredients so I went to work.

The base was baked for 10 minutes before the pear/raisin filling and streusel went on top. (I have to confess, I added one chopped apple because I was just shy of 2 cups) After 25 minutes I had some nice bars that are similar to a crisp-type dessert. They smelled great and cut into bars perfectly. They would taste even more yummy with a scoop of vanilla ice cream. Also, I was all the more impressed since this is a low-fat recipe that replaced some fat with water. (I don't do a lot low-fat baking.) This caused the bars to be less crispy and brown than a full-fat bar but still tasty. You can check out other low-fat dessert options at Rose Reisman's website.

I have two of Rose Reisman's books (Light Cooking and Light Pasta), but have never tried any of her recipes for baked goods. I, too, don't do much low-fat baking, but it is nice to have options!

My friend gave me a cookbook that has some rose reisman recipes in it. I'll have to look at her a little closer now.

I'm always amazed at how excited I get when I see the word "streusel"!

These look wonderful and very creative use of your leftover pears!