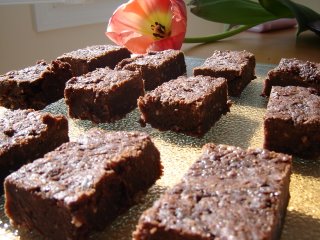 The past weekend was really, really busy. On Friday evening, there was a huge gathering at Elizabeth's and I wanted to make these brownies for her. This in itself was not a bad thing - the problem was that I didn't give myself enought time to properly make them and needless to say, they didn't come out as well as I hoped. I think this is the number one rule of baking - do not rush. Rushing only means one thing - substandard results.

The first problem I had was with the caramel. It was not quite as thick as I would have liked it. It tasted very yummy but was not perfect. The brownie batter was fine and it baked up without any problems. The second issue was that I didn't have enought time to properly chill them. Trying to cut warm gooey brownies into squares does not yield pretty results so I was forced to leave them in the fridge where they stayed until the next day thus completely missing the party.

Saturday morning the bars were nicely chilled. Straight from the refrigerator they tasted like cool chunks of fudge. The chocolate flavour really stood out and they were very rich. You were not able to tell there was coconut in them until you actually bit into a strip of it. After leaving them out at room temperature for a while, the caramel and coconut flavours asserted themselves and the brownies themselves were less fudgy. I was hesitant to serve them as they were not my best effort but everyone ate them and thankfully they are all gone. So the lesson of this baking adventure is to stop and take the time to do things right, you'll be happy that you did.

wow, what a wonderful site! I've bookmarked you to my favorites, and I'll be sure to visit often. And I love that you're from Canada--me too, in Ottawa.

Hi Darien - I'm glad you stopped by! It's always nice to hear from other Canadian bakers out there. :)

You had me at coconut! Those look fantastic ... wish I had one now!