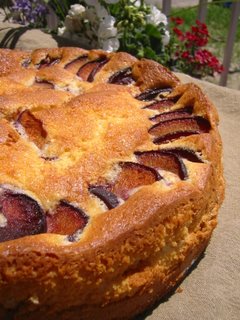 I know that plums aren't in season just yet in Ontario but, I couldn't resist picking some up at the grocery store this weekend. (Months of buying apples, pears and bananas will do that to you.) The recipe I had in mind was one I had wanted to try for a while - Plum Sour Cream Kuchen.

Kuchen is a German word for a "coffeecake raised with yeast, often contaianing fruits and nuts."Dictionary.com
Epicurious.com defines kuchen as "A fruit- or cheese-filled yeast-raised cake, usually served for breakfast but also enjoyed as a dessert. It originated in Germany but is now enjoyed in many variations throughout much of Europe and the United States. The word kaffeekuchen is German for "coffee cake."

The plum kuchen is a variation of the above because it is not yeasted. A orange scented cake batter is topped with cinnamon-sprinkled plums which, an hour or so later, turns into a moist, wonderful cake. Next to apples in pie, cooked plums rank high in my books. They soften while they bake, yet stay semi-firm, juicy and delicious. The cake is fantastic on its own any time of the day (or night) with a hot beverage. A scoop of vanilla ice cream wouldn't hurt either. 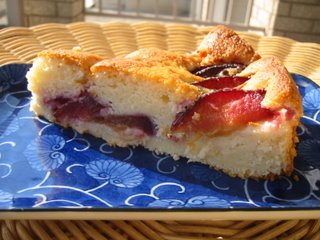 Ay Ay Ay Canadian Baker!!
I can just taste the sweet-tartness of the plums. I love baked fruit. I'm knocking on your door early tommorrow!!!

MM - I have your cake ready to go!

As always, just gorgeous! And timely what with the World Cup getting set to start in Germany. Like you, I can't wait for that fresh fruit to start rolling in.

This looks amazing--both the kuchen and the photo. Well done!

Yum! This reminds me of something similar I had in Switzerland many years ago... I'll definitely be trying it!

Lei - Thanks for reading and I hope you get a chance to try it out. :)

Dare I ask have you ever heard of what they dub here...Pluots? Supposively and apricot/plum hybrid that also happen to be dirt cheap they resemble a black plum and was curious how they'd be in a Kuchen.

Barista Worker - I have never heard of a pluot but after doing a little reading, I think they would work well in the kuchen. At the site www.californiaheartland.org there is a recipe for Pluot Apricot Tart that you can check out. I'll be looking for these this summer! Thanks for the useful info. :)

My great grand mother used to make kuchen for us, although without fruit. Still a memory i'll cherish for the rest of my life. Nothing better than kuchen with blackberry jam (fresh from vancouver island). One of these days i'll have to get around to making her recipe. Thanks for the reminder.

As far as I know, kuchen just means "cake." Most of the cakes my mom makes are either elaborate chocolate constructions or an entire bowl of apples with a little bit of pastry to keep them from rolling around.

I still can't get over the fact that Germans don't have a word for "pie." Well, they sorta do, but "torte" is only a weak approximation.

I tried this recipe today - yum! Thanks for blogging such great recipe ideas and pictures. You are quite the inspiration :)

hey friend I love this post I love all your recipes!!!

i actually adore your own posting way, very unique.
don't give up as well as keep penning as it simply just well worth to look through it.
impatient to browse more and more of your own articles, kind regards :)