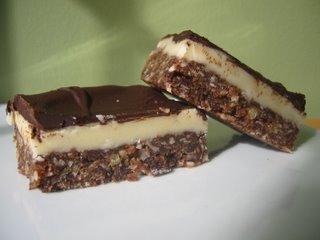 If you're familiar with Canadian desserts then you must certainly have heard of the Nanaimo bar. It is a bar cookie that consists of three layers- a chcocolate-nut-coconut base, creamy filling and chocolate top.

According to Wickipedia, the Nanaimo bar is a "type of chocolate no-bake square, it receives its name from the city of Nanaimo, British Columbia, where it first became known in the 1930s. It consists of a crumb-based layer, topped by a light custard which is covered in soft chocolate. " Wickipedia

Some versions, like my own, require that the crust be baked for 10 minutes. I also made one adjustment to the filling and added some custard powder. I find that this gives it a better flavour instead of just tasting like creamed icing sugar. You can also find many variations out there too - mint, orange, peanut butter and even reverse Nanaimo bars.

The recipe makes a lot and is perfect for sharing or taking to your next potluck. If, you're allergic to nuts just omit them - I think they'll still taste divine!

Recipe: Nanaimo Bars
Posted by Canadian Baker at 8:46 AM

hmm... I've never made nanaimo bars. Definitely something to add to the 'to-bake' list for the holidays! Thanks.

Ah yes, one of the few foods I can tell people is truly Canadian. When they ask me I usually just say Kraft dinner :)

I will definitely be making these treats for Christmas.

they truly are canadian though, I never saw one before I set foot on your soil...or was that tim horton's grounds.

I may have to make these in honor of my canadian brethren.

I’ve never had a nanaimo bar - let stand I made it!
the layers looks really pretty - yum! =)

Ho, they just look gorgeous!! nice picture ..
I planned to cook these for a couple of friends who went to Canada last year and just cannot stop talking about it.
But before that, i have one question: for the filling, you mentionned 1/4 cup milk, is that condesend milk we are talking about?thanks for the recipe
kokelicot(from France:)

Hi Anon - It is regular milk. Thanks for reading!

I love Nanaimo bars, my mom made them a lot when I was growing up and I forgot about them until she mentioned them the other day. Never realized they were Canadian and named after the city in BC until she told me. They look yummy.