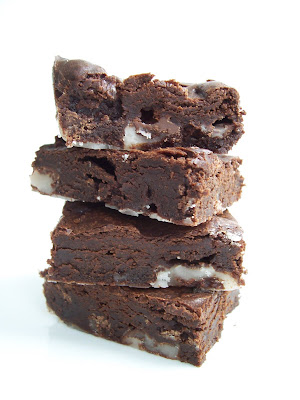 I first saw the brownie-mint patty combination in a Maida Heatter cookbook. She put a layer of mint patties between the brownie mixture and, since I enjoy the mint-chocolate combination, it sounded quite delicious.

Fast-forward a few years and and I have finally gotten around to making a similar version using plain old Coolmints. I would have bought the suggested York Peppermint Pattie Bites had I read the recipe through completely. No worries though - I just chopped them up, followed the directions and was rewarded with a chewy, minty brownie.

I liked how some of the pieces held their shape and provided a nice contrast to the brownie dough. I did end up with a thin layer of mint filling covering the bottom of the brownies which was not a problem at all when it came to getting eaten. These brownies formed a nice thin crackly top and were best eaten once they were completely cool. (They are fragile otherwise.)

Enjoy with some cold milk, or turn them into brownie sundaes as Dorie suggests. Either way, this is one super-cool treat!

I'm not sure what cool mints are? BUT I love mint and chocolate...and York!

I made a version of these for Christmas and they where fantastic! Yours look super delicious.

Honeyb - Coolmints are made by Neilson and consist of a soft chewy white mint filling surrounded by chocolate. It is like a York Peppermint Patty or a Neilson Pep. It is about the size of a quarter and for the recipe I cut them into 4 equal parts. Hope this helps!

I have never baked with mint - these look so good, Jen!

I love these right out of the freezer, they're great!

OH MY GOSH!! These look so good! Please publicize the next time you make them, it just might be worth a drive to M*lt*n. :)

Sammarei - Next time you come out this way I will make a whole pan especially for you!

You just made brownies soooo much better! Awesome recipe - thanks!

Next time you come out this way I will make a whole pan especially for you!