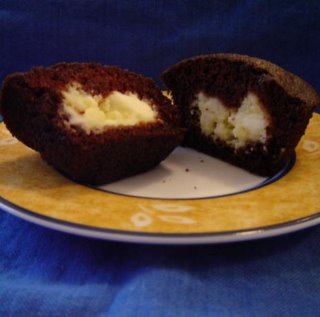 I had half a block of cream cheese left over from a previous dessert and I wanted to make something quick and simple for some friends I had over. I decided on Fudgy Cheesecake Cupcakes since the chocolate cake recipe is almost the same as 'Mix in the Pan' chocolate cake. This usually means that everything can be mixed in one bowl. Another feature of this cake recipe is that eggs are not required. (Except one yolk in the cream cheese mixture) It is similar to the recipe for Eggless Chocolate Cake posted on the Bakingsheet blog.

The recipe I used is from a Canadian Living publication called Canadian Living's Best Muffins and More. It is very easy to make these muffins. Once you pour the chocolate batter into greased muffin cups, you put a dollop of the filling on top and then let the oven do the rest. The filling should be rather thick so that it doesn't spread throughout the cupcake while baking.

The muffins are moist and the cream cheese filling is suspended perfectly in the middle. The filling is cheesecake-creamy which complements the flavour of the sweet cupcake. I love these cupcakes because they are a notch above regular plain ones and, if you're in the mood for indulgence, a chocolate glaze would definitely raise the bar.

If you're looking for a similar recipe, try the Black Bottom Muffins from Canadian Living. They are basically the same except it calls for a whole egg in the filling, not just the yolk.
Posted by Canadian Baker at 6:32 PM

Hi,
I have tried the black bottom cupcake recipie and would urge everyone to use just an egg yolk. I used the whole egg ane the filling was too thin. It set as a layer in the middle of the cupcake, not the nice "surprise"center that Canadian Baker has. Mind you, if she made them they would turn out perfectly...it's in her hands :)

Hey, have you tried that lactania chocolate or caramel cream cheese? I saw them on clearance for 99 cents( dont think they were big sellers). I wonder how they would be in these. These look yummy

Hi Randi - I've seen those flavours in the store and I think they would work here. People probably don't know what to do with them - they seem more suited to baking than spreading on a bagel. :) Thanks for reading!