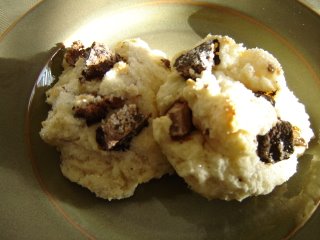 Tea biscuits, or scones, are another favourite treat in our house. They in no way resemble the rock-hard variety that can be purchased at the local grocery store. The great thing about scones is that they can be tailored to suit everybody's tastes. Mr. CB likes his with chocolate chunks and since I had some leftover from Triple Chocolate Chunk Cookies, I obliged.

The recipe I used comes from Canadian Living. The dough mixed up nicely and instead of shaping them, I just dropped scoops of dough onto the cookie sheet and flattened them slightly. After a sprinkling of coarse sugar, they were ready to be baked.

Pulling out a fresh tray of scones from the oven really makes my day. They were golden, sparkly and studded with chunks of soft melted chocolate. The outside was lightly browned and crisp and when you bit into them, the fluffy centre revealed itself in all its glory. There's no way you could break a tooth on these! Try them with anything you like - raisins, currants, dried fruit...the possibilities are almost endless.

These look and sound absolutely delish! And what a coincidence--I've been meaning to experiment and make some "drop" scones. Looks like this is the recipe to try. (And I just happen to be planning to make scones today.) I'm a certified Sconehead and popped over here from Sweetnicks when I read that you had a recipe for strawberry scones. I haven't made it to those yet--I was waylaid by the word "chocolate." : )