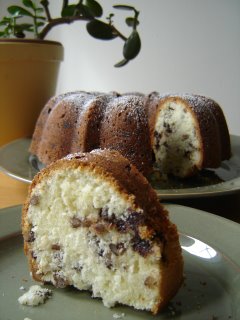 This morning I looked out the window and saw snow. I like Canadian winters as much as the next person but where is Spring? I decided to cheer myself up by trying another cake by Nick Malgieri since the first one came out fabulous. My choice this time was the Chocolate Chip Pound Cake. A good, solid cake to have on hand for when company drops by.

The recipe for this cake varies a little from other cakes because you have to separate eggs. The egg whites are beaten into soft peaks and folded into the batter at the end. This caused the main mixture to be a little stiff but once the whites were added it became more cake-like in consistency. The batter poured easily into the pan and after about an hour I had a great cake to share.

The crumb was dense and the cake itself was moist. Pound cakes usually have to cook for a long time and I think this contributed to the darker shade of crust. No matter - with a dusting of icing sugar the cake was ready to be eaten. I would make this cake again and the nuts can be omitted if desired and orange rind could easily be added for an extra flavour dimension.

I know exactly how you feel! I saw snow on the roofs this morning and was like ... what's going on here???

Your cake has cheered me up considerably!

I guess I shouldn't tell you it was nice and warm in Phoenix!

I'm a big fan of Nick Malgieri - I don't think I have ever made anyting that turned out bad from him!

Your cake looks delicious! Can't wait to try the recipe!