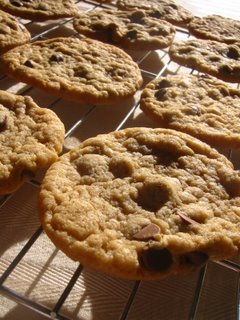 A while back, the Toronto Star printed and article about the results of Canada's Best Chocolate Chip Cookie Contest. I decided to make the winning cookie, #205, because it was said to be "oddly compelling and unusually delicious." I found this intriguing because this cookie contained a secret ingredient - instant vanilla pudding. I have never tried pudding mix in cookies and was reluctant to do so but I thought that since 14 well-known Canadian judges including Elizabeth Baird, Rita DeMontis and Dufflet Rosenberg gave it the thumbs-up I would give them a try.

The very first comment I got was from my 5 year old neighbour who enthusiastically said, "These are deeeeelicious!!" Who could argue with that? In a matter of seconds, the first dozen cookies disappeared and I was forced to concede that the cookies were definitely kid-friendly. There is no discernable vanilla pudding taste in the cookies and the melted butter and brown sugar give the cookies a nice caramel flavour. They are sweet but not too sweet and are undoubtedly pleasing to eat. I detected a small aftertaste from the pudding but that's just me being picky. I don't necessarily think you need vanilla pudding to make a flavourful cookie but these were tasty. Congratulations to Andrea and Sarah for coming up with the winning recipe!

The recipe link is not working. Can you please re-post. These cookies sound fabulous! Thanks.

Nicole - The link should be fixed now. I'm glad you liked the recipe!

You know I read that same article and thought the same thing you did ... vanilla pudding ... in a cookie ... sounds strange!

But I'm glad you tried it and obviously the results are worth it.

The cookies look terrific. Now all I need is a glass of milk ...

Thats so interesting- I wonder how they thought to use vanilla pudding in a cookie?! You mentioned there's a slight aftertaste but was there any effect on the texture from using pudding mix?

Tanvi - No, the pudding didn't have an effect on the texture of the cookie at all. The powder just dissolves into the batter. :)

I'm glad you tried this recipe. I remember reading about it a couple of weeks ago and, like the rest, wondered how the pudding would behave.

Now I'm wondering how other flavours would work in the batter :)

i dont bake cz i hate cooking and baking.. but i made this recipe and OMG they turned out AMAZING. so delicious. Thanks for sharing ur talent