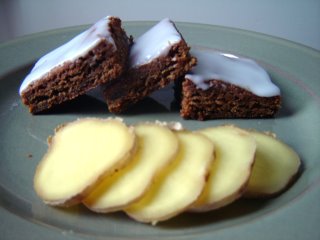 This month, Barbara at Tigers & Strawberries is hosting an event called "The Spice is Right". The objective is to focus on spices, specifically ancient spices, that are used in cooking and baking. The spice I decided to focus on was ginger.

I chose ginger because it gives baked goods a spicy pungency that is comparable to none. It is not bitter and evokes feelings of warmth. In the bars I made, two kinds of ginger were used - ground and crystallized. Although I can only eat a little piece of crystallized ginger, I know many people who eat them like candy. I believe it is because they like the hotness of the ginger as well as the medicinal benefits.

Here are some interesting facts I learned about ginger:

1. It was from the Sanskrit word 'shringavera' (meaning 'horn body') that the Latin name Zingiber was derived. When Ginger was introduced into England it became known as 'gingifer' and it is from this word that the name we call it today evolved
2. The rhizome (the underground stem) is the part of the plant that is harvested for use in cooking and in medicine.
3. Ginger is a perennial plant whose root has a very pungent flavour.
4. It is grown in warmer climates such as China, India, Jamaica and Hawaii.
5. Ginger root has a long history of culinary use in these cultures and a history of medicinal use in China, Japan and India since the 1500's. (nausea, pregnancy related, motion sickness, digestion)
6. Potted ginger plants were carried on local vessels travelling the maritime trade routes of the Indian Ocean and South China Sea in the 5th century AD and probably before.
7. The Hindu epic Mahabharata written around the 4th century BC describes a meal where meat is stewed with ginger and other spices.
8. Ginger was one of the most commonly traded spices during the 13th and 14th centuries.
9. Arabs carried the rhizomes on their voyages to East Africa to plant at coastal settlements and on Zanzibar. During this time in England, ginger was sought after, and one pound in weight of ginger was equivalent to the cost of a sheep.

Of course, I could go on and on about ginger but I don't want to bore you. :) If you would like to read more, the Internet is a virtual treasure trove of information.

The bars I submitted for this event are decidedly ginger in flavour and are enhanced with cinnamon, cloves and molasses. When trying one, the words "Mmmmm, gingery" are probably what you would say. (At least, Mr. CB did.) They are chewy, have the texture of a brownie and the little chunks of crystallized ginger give the bars the extra oomph and spice to earn the word 'double' in the title. Add an icing glaze and these bars are fit for any occasion when bland just won't do.

Posted by Canadian Baker at 5:06 PM

Yum! I love ginger! And thanks for adding me to your blogroll. I'll add you to mine. :)

Spicehut - They're pretty tasty. If you're a ginger lover, these are the bars for you. :)

These look wonderful. I've lately been on a bit of a ginger kick, happily playing with a bottle of ginger marmelade...

Mallow said...
This comment has been removed by the author.
2:09 PM

I was looking through your blog and when I found this recipe I had to make it immediately. YUM!