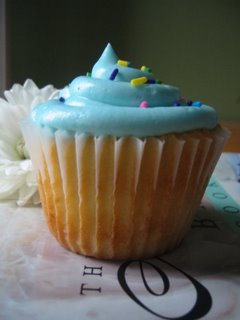 I've had the Magnolia Bakery Cookbook for a long while now and decided it was about time I made their famous cupcakes. I was going to take them to the bakesale but ended up taking them to a birthday party on Saturday instead where they were very much appreciated.

The cupcakes were easy to mix together and only contain the very basic of ingredients - butter, flour, sugar and milk. It does call for self-rising flour (which I don't have) so I added some baking powder. The first batch I made came out fine and golden , though some were bigger than others. The second batch came out more evenly sized. Once they were cooled, I iced half blue and half pink. (I was going for red but ran out of the red food colour paste.) The Magnolia buttercream is also very basic - icing sugar, butter and milk. It was sweet and creamy and tasted exactly how you'd imagine it to taste - like icing. The more you beat it, the creamier it got, almost to the point of melting in your mouth.

The cupcakes won rave reviews in my house. My taste testers said the cake was great and seven were eaten before we got to the party. I think cupcakes are fun to make and look really nice all dressed up with icing and sprinkles. They're portable, not too messy and kids and adults like them. I have some leftover pink icing so I think I'll make some more. I'm sure they won't last long!

Posted by Canadian Baker at 7:13 PM

I've been trying to leave you a comment about these cupcakes for 2 days. I kept getting error messages from blogger so hopefully you get this one.

They're just gorgeous. You are the best Canadian baker!

Thanks Ivonne! I don't know about being the best though - I think you are an amazing baker!

fabulous. I tried those not too long ago, and they were terribly yummy. Your site is great...I will be back often!

congratulations ! your recipes are so beautiful !!!

Rebekka & Reinefeuille - Thanks for stopping by! I'm glad you both liked the cupcakes. :)