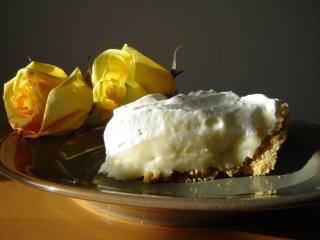 For this month’s SHF, stimulating desserts were the topic of choice. Well, considering Valentine’s Day is less than a week away, creating a passionate confection seemed very timely and I got to it. The most obvious aphrodisiac connected to sweets is chocolate so I thought I would travel down a different road and make a classic Banana Cream Pie.

At first thought, bananas would not come to mind as an aphrodisiac. I searched the Internet and found some interesting facts about this common yellow fruit and why it would be suited for a Valentine’s Day dessert.

1. The banana flower has a marvelous phallic shape and is partially responsible for popularity of the banana as an aphrodisiac food. An Islamic myth tells the tale that after Adam and Eve succumbed to the "Apple" they started covering their "nudity" with banana leaves rather than fig. From a more practical standpoint bananas are rich in potassium and B vitamins, necessities for sex hormone production.

2. Due not only to its shape, but also its creamy, lush texture, some studies show its enzyme bromelain enhances male performance.

The recipe I made came from the Clueless Baker and, although there were multiple steps and long cooling times, the pie was incredibly easy to make and assemble. The stovetop custard set up nicely in about 8 minutes. The only problem I had was trying to cut a decent piece for my picture.

The custard was creamy and thick with sliced bananas in the middle letting their subtle flavour infuse the pie. It was all topped of with fresh whipped cream (who doesn’t love whipped cream) and encased in a homemade graham cracker crust.

If you would like to try out the recipe, you can find it here.

Also, thanks to Jennifer at Taste Everything Once for hosting SHF this month.

Banana info was obtained from Gourmet Sleuth and About.com

Who knew? I never would have guessed my morning banana was so potent!

Thanks for taking part in this month's Sugar High Friday. Look for a round up by the end of the weekend.

The picture is lovely. The yellow roses and your description of bananas take the ordinary fruit to new heights!

Paige - Thanks for your feedback! I'm glad you liked the roses.

Banana cream pie is always one of my favorite! Don't know about its effect on sex or hormone, but your creamy pie certainly enhances my appetise :D

Thanks for the nice compliment! Your pie looks great. I never knew bananas had such a colorful (ha!) history.

How do I find out about home business success Short but True ..If You want to quit talking about becoming successful and do something about it visit us at http://success444.com...