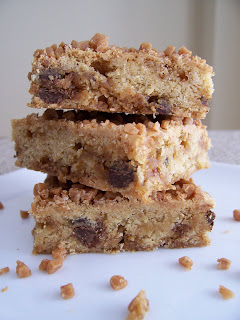 I've had a package of Skor bits in my cupboard for a while now. I was saving them to do something fabulous with, but I just didn't get around to making anything show-stopping. This past weekend, we didn't have anything baked in the house and Mr. CB said, "Boy, a square and some hot tea would be really great right now." I looked at him and he smiled. I went to the kitchen to see what I could do.

I picked up the bag of Skor and turned it over. There was a recipe on the back for Skor Bars, or something like that. (I threw away the package and forgot the actual name of the recipe). The directions were very simple - a blondie bar batter was mixed up and chocolate chips and Skor bits were added and then baked up. When the bars are done, the remaining Skor are sprinkled on top. You don't want to bake them too long or they will get hard. The bars were tasty and chewy. The addition of the chocolate chips was ingenious otherwise the bar would have been a bit benign. The Skor added some buttery flavour to the bar but the chips added a good punch of sweetness and some character. Also, don't forget to cover them. I left mine out overnight in the pan and they were decidedly drier the next day.

Next time I'm at the store, I'll buy another package of Skor and post the recipe. :)

Update: The recipe has been posted!

Recipe: Toffee Crunch Blondies
Posted by Canadian Baker at 9:13 AM

I've also had a package of skor bits in my cupboard forever, I've got to do something with those soon...

I found a link for the recipe:

I loved this recipe and the ones listed were not what I had made from the pack. Mine included sweetened condensed milk. Here is a link to this recipe.http://www.cooks.com/rec/view/0,176,134181-252195,00.html